In Search of Lost Time

Mark her down as a daring and exciting young performer who ventures courageously into unknown territory with relish. Last year, her production of Love's Delusion, a fascinating music-drama inspired by excerpts from the works of Proust, was premiered to a full house at the Dublin Fringe Festival. The format devised by Masin has huge potential for the presentation of classical music in a literary context.

“Encores for a standing ovation”

The series got underway with a tremendously enthusiastic audience at the opening concert, with thrilling violinist Gwendolyn Masin playing encores for a standing ovation.

This impressive music-drama proved hugely popular, thanks to adventurous talent Gwendolyn Masin, whose brilliance once again contributed to another successful performance.

In Search of Lost Time is under the guidance of violinist Gwendolyn Masin, who is not just a brilliant musician but also an innovative and daring operator within the musical-cultural sphere.

“Energy and talent channelled into innovation”

There’s nothing more exciting in classical music than seeing energy and talent channelled into innovation. It helps, of course, if you are young and have the broad horizons of an already-established career beckoning. Gwendolyn Masin fits the role nicely. She is 26 years old, has an impeccable musical pedigree, has glided over the pitfalls of child prodigy status, and progressed at such a pace that concertos are being dedicated to her. 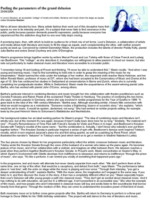 Peeling the parameters of the grand delusion

Masin's programme brings together works by writers Marcel Proust and Leo Tolstoy with those of César Franck and Ludwig van Beethoven. This "collage", as she describes it, investigates our willingness to allow passion to cloud our reason, but also sets out particularly to make classical music and literature more accessible to a broader public.