Gwendolyn Masin is one of today’s significant concert violinists. She is regarded as, “a formidable talent that demands attention” (The Irish Times), “appearing to merge with her instrument and in so doing, enchanting her audience” (Thuner Tagblatt). She is celebrated for, “setting first-rate standards in concert performance with her technically superior, refined, intensive and richly contrasting expression” (Der Bund).

Gwendolyn is descendant of a lineage of classically-trained musicians and remembers playing violin as naturally as having a conversation when she was a child. Her family, imbued with musical insight, helped her to avoid, “the pitfalls of child prodigy status” (Figaro.hu). Her formative years were shaped by musical instruction, world travel, performing for audiences in reputable concert halls, and collecting accolades internationally—all by the age of five. At eleven she gained national exposure in Ireland after appearing on, The Late Late Show. She has been a regular guest on TV and radio shows and has performed in Asia and throughout Europe, Russia, South Africa, the Middle East, and North America. 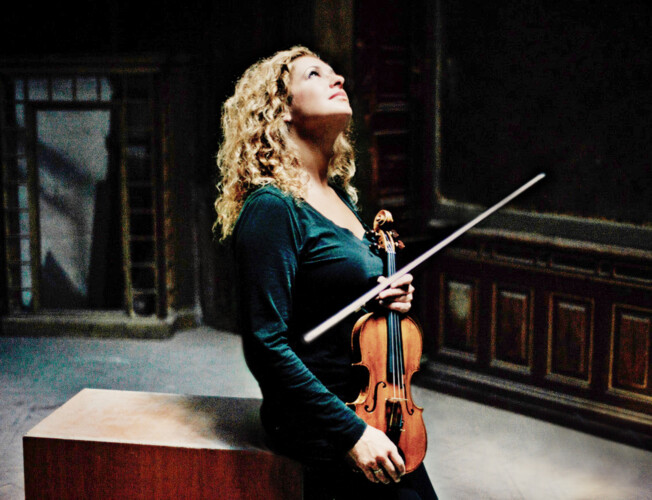 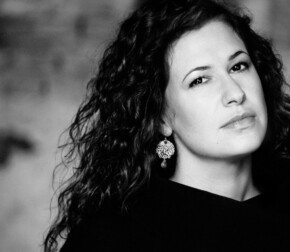 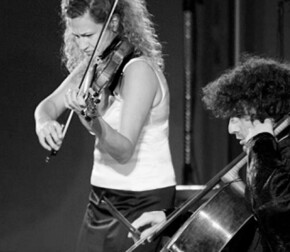 “The pursuit of a distinctive voice is driven by timelessness”

Gwendolyn holds degrees with highest honors from the Royal Schools of Music in London, England; the Hochschule der Künste in Berne, Switzerland; and the Musikhochschule in Lübeck, Germany. Her teachers include Herman Krebbers, Igor Ozim, Ana Chumachenco, Zakhar Bron and Shmuel Ashkenasi. Gwendolyn cultivated a distinct style of violin-playing, as well as her identity as an artistic tour de force while carrying out formal studies. “I have had the privilege of collaborating with some of the most acute musical minds of our time. My physical style of playing, as well as my approach to interpretation, draws on this — mixed with my own discoveries.” Not only is Gwendolyn an esteemed soloist and chamber musician, she also writes, transcribes music, and advises composers.

“It's not the genre, it's the music that interests me” 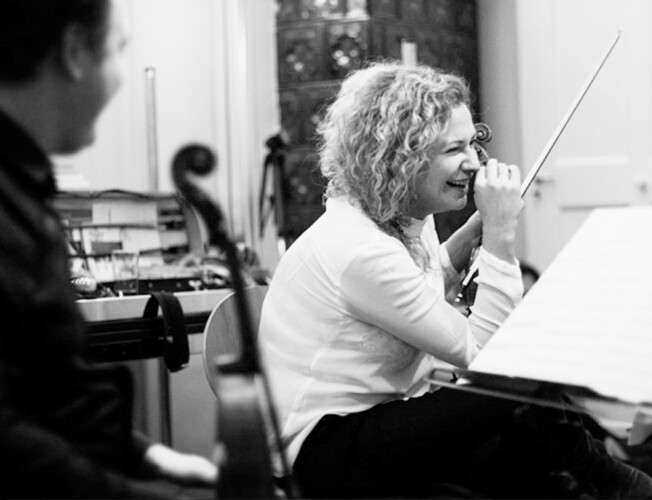 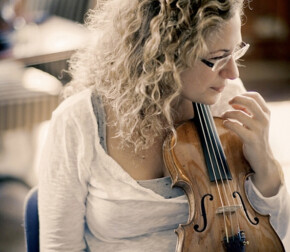 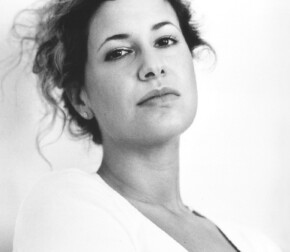 “A profound musician is one who serves music, not themselves”

Collaboration with contemporary artists is also a large part of Gwendolyn’s repertoire. In an effort to make music more accessible, She commissions artists, working closely with them and performing their music or integrating their respective art and mediums into her interpretations. She’s received support in such ventures from various foundations such as the Arts Council of Ireland and Berne’s Cultural Bureau. Gwendolyn has recorded for Tonus-Music Records and has lent the voice of her violin to the Swiss film, Localisation. She’s also premiered works by, amongst others, Raymond Deane, Don Li, Urs Peter Schneider, Daniel Schnyder, Eric Sweeney, Martijn Voorvelt, and John Buckley, the latter of whom dedicated his first violin concerto to Gwendolyn. Buckley’s concerto premiered in Savannah, Georgia, as the Savannah Philharmonic’s season opener to a sold-out Lucas Theatre in 2013.

Gwendolyn is an International Music Award recipient, was nominated for The Outstanding Young Persons of Switzerland Award for her achievements, and has received support from the Swiss Foundation for Promotion of the Interpretative Arts. Other national and international prizes and awards were won in numerous countries in Europe and South Africa. A recent undertaking is a TV and web-series titled, Gwendolyn’s Playground, that takes viewers to a myriad of cities around the globe to explore how classical music inspires and influences her, as well as other artists and their audiences. In 2016, Gwendolyn was asked to be a keynote speaker at TEDxBern where she presented the talk, Better Performance Through Failing Better.

“Sound is the last step toward making music.”

It is a disservice to Gwendolyn to regard her solely as a musician. Research and application of music methodology are an inseparable part of her undertakings. Her doctoral thesis from Trinity College examines the similarities and differences within 20th-century violin pedagogy. In 2009, the award-winning, Michaela’s Music House, The Magic of the Violin, was published. Authored by Gwendolyn, the book serves to instruct beginner violinist. It is in three parts and includes her studies and compositions. Michaela’s Music House is available in English and German and is part of the ESTA Edition collection available via Müller & Schade. Gwendolyn believes that, “Music is alive, and so personal change and development within its corpus is inevitable. Once an artist knows the rules, they can gain true glee from breaking them and from that, gain a sense of individuality and a freedom of spirit.”

Presently, Gwendolyn teaches violin and chamber-music masterclasses at institutes and festivals throughout Europe and North America and gives lecture-recitals and talks concerning her areas of expertise. She is Professor of Violin Studies at the Haute École de Musique de Genève, Switzerland, since September 2013. Gwendolyn says, “My students have begun to refer to my classes as ‘The Laboratory.’ We experiment and question the assumed truths we’ve been told.” 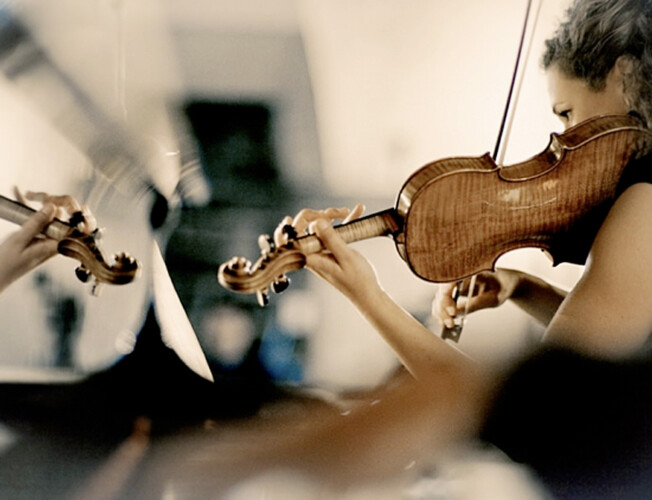 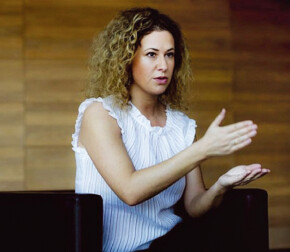 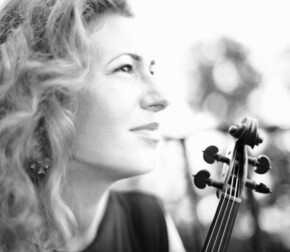 “The space between notes creates the poetry within music”

The intellectual and philosophical foundations that Gwendolyn has built shape her performances as well as her perspective. She believes that there is a psychological difference between a musician who only performs in concert halls and musicians that come to a performance with a complete understanding of what goes into getting that musician on the stage and the audience in their seats. “If performance were a box, there are those who step into the box – the spotlight is on, and they play. I step out of the box, into the spotlight and play – with me is a deep appreciation and comprehension of what goes into creating that moment wherein the first note is sounded for an audience.”

This understanding is the result of Gwendolyn’s involvement curating and producing music festivals. Most prominent for Gwendolyn is her role as Artistic Director of GAIA, an annual festival held in Switzerland, recognized as one of the country’s most important. It brings together acclaimed musicians for a long weekend of concerts and community. Gwendolyn also co-directs and produces the audio and visual media that is showcased as part of GAIA, in collaboration with Naxos, the world’s leading classical music group. Other notable ventures include establishing the international, multidisciplinary series, In Search of Lost Time, for which in 2004 The Sunday Business Post stated, “mark her down as a daring and exciting young performer who ventures courageously into unknown territory with relish.” In 2007, Gwendolyn was appointed Artistic Director for Ireland’s Carrick Music Festival, a post she held for three years.

“Music transcends that which cannot be put into words”

This autumn, the 2019 season will begin with a four-concert series at The Casino, the great hall of Berne; and the series affords Gwendolyn carte blanche to work with some of her favourite artists from around Switzerland and beyond including collaborations with Andreas Schaerer and Barbara Dennerlein. Other concerts include recitals with pianists such as Caspar Vos and Cédric Pescia, as well as major collaborations with the writer Lukas Bärfuss. Gwendolyn will also have solo performances with orchestras such as Concerto Budapest.

The 2019/2020 season also heralds the continuation of Gwendolyn’s collaboration with pianist Finghin Collins. Following their six-concert series in the National Concert Hall of Dublin, summer 2020 marks the second edition of the National Concert Hall International Summer Academy, which they founded in 2019. In addition to teaching masterclasses in Europe, Gwendolyn has designed and will begin offering “The Exhale”, a masterclass that aims to inspire well-being in musicians through a holistic approach to playing. The inaugural iteration of “The Exhale” will take place at Lake Biel.

Following the release of three recordings in three years: ORIGIN (2016), FLAME (2017) and TROIS (2018), Gwendolyn is in pre-production for the follow-up to ORIGIN. Unlike FLAME and TROIS which are recital programmes with her long-standing duo partner Simon Bucher, the ORIGIN follow-up is designed around her ensemble of rising stars – gifted students from her own class and from a myriad of institutions across Europe – and features music from film, opera, and folk music that has been reworked for the players.

Gwendolyn’s intrinsic ability to play the violin is not simply inherited, but founded in her voracious curiosity to understand human nature, musical expression, and the psychological connection to said expression. She explains, “I feel that music is a perpetual companion and my life feeds and informs my love for it and vice-versa. The experience of live music is everything. To me, it’s the ultimate form of communication, moving us into dimensions that language, for example, cannot reach. A word is not a sentence, but a note can be an entire story.”

Holds degrees with highest honors from schools of music in England, Germany, and Switzerland.

Doctoral thesis, Remembering the Future of Violin Performance, and award-winning book, Michaela‘s Music House, The Magic of the Violin.

Teaches masterclasses throughout Europe and North America, Professor of Violin Studies in Geneva.

Artistic Director of GAIA Music Festival and In Search of Lost Time.